Did you know that Golden, Colorado, located 12 miles west of Denver, brews more beer than any other city on the planet? This is largely due to the fact that hometown favorite Coors Brewery is the world’s largest single-site brewery. But Golden also has an assortment of award-winning craft breweries producing wonderful ales, wheat beers, pilsners and stouts. 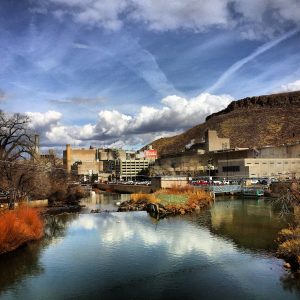 On any windy day, the smell of hops will permeate the air in Golden, giving it a distinct, but mild and pleasant, smell that is sure to delight any beer lover. And beer lovers flock to Golden year round. They may come for the beer, but they stay for the town's charming atmosphere and natural beauty. Autumn is the best time to visit. After all, what's better than a delicious IPA after a crisp fall hike through gorgeous Golden?

Golden is located in an area of spectacular natural beauty. To the east, are two mesas -- high flat-topped plateaus surrounded by cliffs - and to the west Golden is the spot where the Great Plains hit the Rocky Mountains. Most notable of the Front Range peaks which tower over Golden is Lookout Mountain that boasts a road filled with hairpin turns and climbs an unbelievable 1,200 feet in just four miles. Down below, Clear Creek cuts through rock to create a beautiful canyon before spilling out into and rushing through downtown Golden.

Here are six classic Golden hiking or bike trails paired with a perfect pub stop for a beer afterwards. There you can soak in the autumn colors and savor the taste of fall. 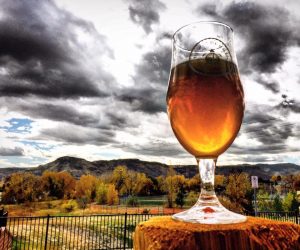 ain 1,500 feet in elevation before you reach the top. Enjoy the view and hurry back down for a craft beer at New Terrain.

Beer Stop: New Terrain Brewing Co. is Golden’s newest craft brewery. It’s located on the eastern edge of North Table Mountain with a view down into Clear Creek Valley. Almost all the walls roll up, there's an outdoor beer garden with picnic tables, fireplace, food trucks, and eight beers on tap, with more coming. The beer is first rate, but it's the views and architecture that make it worth a journey. It's like a ski lodge dumped into the Front Range with buttes in every direction. Plan to spend the afternoon.

Located just south of Golden on State Highway 93, this Jefferson County open space park has nine miles of trails. A particularly beautiful stretch is the 2.8 mile Red Rocks Trail, which climbs up some mild switchbacks, offering spectacular views of towering red rock formations as you approach Red Rocks Amphitheater. Another, more strenuous hike is the Dakota Ridge Trail, which climbs up and down along the twisting Dakota Hogback, an unusual geologic formation. The first dinosaur bones ever discovered were found along this hogback. Nearby on Dinosaur Ridge, you can see million-year-old dinosaur bones and dinosaur tracks, still visible in the rocks.

Beer Stop: Located across the street from Coors, the Barrels & Bottles Brewery is one of the most unique Golden breweries. There are 27 craft beers on tap (a half dozen of their own and great guest beers from across the country) and 24 wine taps. If you’re not familiar with tap wines, it’s a growing trend and the freshest way to enjoy wine right from the barrel, including wines produced right here in Colorado. A local’s tip: Stop by and say hi to the owner’s two dogs, Pixie and Oba.

The most popular trail in Golden offers all forms of recreation, from strolling to skateboarding, from tubing to biking. The paved, mostly level recreational trail stretches from the beginnings of Clear Creek Canyon in the Foothills of the Rocky Mountains, all the way down to the South Platte River in Denver, 19 miles away, offering a tree-lined path with fishing, horseback riding, kayaking – and even gold panning along its banks. Clear Creek Canyon was the historic route the railroad and stagecoaches took to the gold strikes in Central City and Black Hawk, and on weekends, you can expect to see a couple of dozen people still panning for gold, which washes down the river today just as it did 150 years ago. The Clear Creek recreational path is a perfect trail for families and picnics, and there is ample parking in downtown Golden just minutes from the trail. 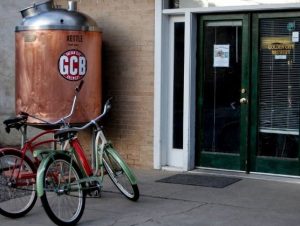 Beer Stop: The Golden City Brewery is just a block from the Clear Creek Trail and offers the one-of-a-kind experience of enjoying a beer in the brewer’s backyard. The brewery was founded in 1993 by two geologists, in an old machine shop behind their historic Golden home. The tasting room was originally located in the sun room of their house. Since that time, the operation has expanded and now the carriage house is the tasting room and their backyard is the beer garden. It’s a friendly place with everyone sharing tables and making new friends. In winter there’s an outdoor fire; in summer, there are often musicians playing. Order a beer through the Dutch door of the carriage house, find a table, and relax in the backyard. After a walk on the river, try the appropriately named Clear Creek Gold Pale Ale, an award-winning, traditional German Kolschbier hopped with Czech Saaz for a pleasant floral finish.

The best place to get an introduction to hiking in Golden is the gorgeous 1917 Boettcher Mansion on top of Lookout Mountain. Once a summer home for the Boettcher family, this beautiful log building has been turned in a museum along-side a nature center in the middle of a preserve. The preserve has 1.4 miles of gentle trails that wind through ponderosa pine forests mixed with meadows of wildflowers. Exhibits in the center will tell you about the black bears, mountain lions, bobcats, elk, and mule deer that are often captured on the center’s cameras.

Beer Stop: Now that you’ve learned about the flora and fauna of the foothills above Golden, learn about the beer made down in the valley by taking the free, 30-minute, self-paced tour of the malting, brewing and packing of Coors Beer. Coors is the world’s largest single-site brewery and a perfect place to learn how beer is made. Explore a room of giant copper kettles and then stop in the fascinating packaging room, where millions of cans and bottles whirl by, on their way to being filled with beer and slotted into six packs. After the tour, those 21 and over can sample three free glasses of beer (with soft drinks for those under 21). Try a Colorado Native. This tasty beer is only available in Colorado and is the only “all Colorado” beer made with just Rocky Mountain water, Colorado-grown hops, Colorado-grown barley from the San Luis Valley and the oldest strain of brewer’s yeast in Colorado. 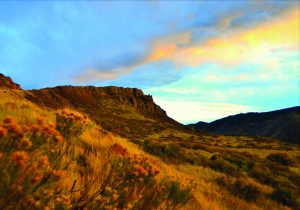 One of the chief landmarks of Golden is this broad, flat-topped mesa that rises hundreds of feet above the valley and is ringed by cliffs with a half dozen hiking and biking trails crisscrossing the area. The classic hike or bike trip is a moderate 5.9 mile loop trail that will take you around -- and over -- the mesa top, with 360 degree views of Golden, Denver and the Front Range. A new parking area on Colorado Hwy. 93 just north of town has maps; trails head off clockwise or counterclockwise around the mountain. It’s a mixed-use trail with some steep climbs and singletrack sections for bikers. Once on top, look for herds of deer.

Beer Stop: Cannonball Creek Brewing is just down the road from the North Table Mountain trailhead and a perfect Golden beer stop. Cannonball Creek was the original name of Clear Creek, which flows through the heart of downtown. In its first year, this young brewery took two prestigious silver medals at the Great American Beer Festival. They took Gold in 2014. They usually have between 6-12 craft beers on tap. After a tough hike or bike ride, you deserve the Almond Chocolate Stout, brewed with six pounds of fresh roasted almonds and a generous portion of Belgian dark chocolate to give it a nutty, bittersweet chocolate finish.

Located just a few miles west of Golden, this gorgeous old ranch has 20 miles of multi-use trails arranged in ingenious patterns, offering a wide number of loop hikes or mountain bike rides for all abilities and lengths. There are mountain and canyon views, old ranch barns, and a collection of antique farm equipment that all make for wonderful photos. Hike in pine forests or across open meadows. It is especially wonderful after a fresh snowfall for snowshoeing and cross country skiing. In the fall, there are pretty stands of aspen that turn all shades of gold.

Beer Stop: The Mountain Toad is the quintessential Colorado brewery with big windows that open to the outdoors, an outdoor patio with food trucks, a beer garden, and 6-12 craft beers on tap. Check out the chalkboard to see what beers have been added to the menu. You can bring in your own food, or buy food at the adjoining food truck, or even order in a pizza. Dogs are welcome and mingle with guests inside and out. Try a tray of four ounce samples, or if you’ve just come from White Ranch, dig into the White Ranch Wit -- a complex wheat ale brewed with orange blossom honey, grapefruit peel and coriander with notes of citrus and spice.

Alternate Beer Stops: If you are Gluten-Free, Golden has a brewery for you! After your Golden adventure, head to Holidaily Brewing Co., the only dedicated, gluten-free brewing facility in the state of Colorado. Holidaily is dedicated to creating great-tasting gluten free craft beer.